A solid bill of ’90s veterans in different stages of their careers got people out early, as the sold-out Royale was filled by 6:30 PM, when Hum took the stage. Unlike Failure, whose re-grouping has created an new excellent record that maintains their form and even expands on it a bit, Hum made it pretty clear that this was just a victory lap to be savored by fans. Exhibit A was the guy who flew from Australia to enthusiastically crowd surf, suspended by the hands of the crowd as much as the dense, atmospheric clouds of guitar haze that Matt Talbot and Tim Lash conjured. Sounding a bit like the conjoined twin of Slint and Bitch Magnet with some of the rough edges sanded down, Hum proved that they are more than just “Stars,” the song that secured a foothold on FM radio back in the day.  Which just shows how fickle fate is; their next and ultimately their final record was just as good as anything they’d done before; why did “Green To Me” or “Isle Of The Cheetah” resonate just as strongly? Something we’ll never now.

As it was a co-headlining gig, Hum got an encore before the stage was cleared for Failure. And by cleared, the stage hands didn’t fool around – it was a great expanse of emptiness, no monitors or cables cluttering the floor.  Ken Andrews and Greg Edwards were stationed a fair distance back from the edge of th stage, with two LED panels behind them, and drummer Kellii Scott sandwiched between. Playing material mainly from Fantastic Planet and The Heart Is A Monster, Edwards and Andrews kept things off balance by occasionally switching between bass and guitars, and trading lead vocals. The prickly “Counterfeit Sky” gradually gave up its beauty, and the lurching “Segue 1” blended seamlessly into the urgent “Smoking Umbrellas,” reminiscent of the stately grandeur of Interpol mixed together with the guitar crunch of Queens Of The Stone Age. Welcome back, Failure.

Photos of both bands below (click on the photo): 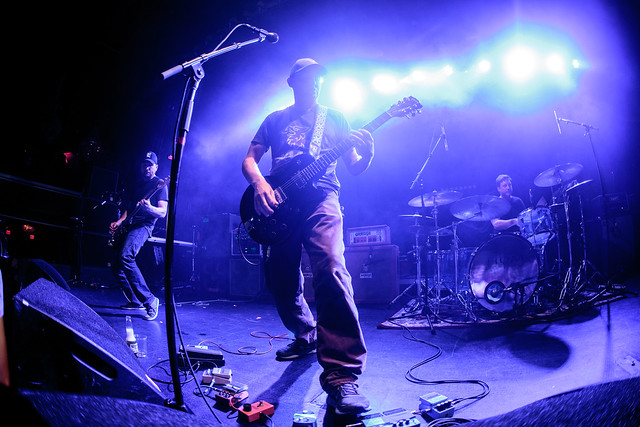