Metal bands have been applying black and white grease paint and adding theatrical flourishes to their stage show for a while now, and there’s a direct lineage from Alice Cooper to Kiss to Mercyful Fate that Ghost fully appreciates while shamelessly borrowing from. Assuming you know nothing about the band, the basic gist is melodic metal (think mid-80s Blue Oyster Cult with all weird edges sanded down, mixed with some contemporary sounds a la the recently disbanded In Solitude), but the delivery is cloaked in mystery.

In fact, none of the members have been identified. Papa Emeritus, the singer and de facto leader of these nameless ghouls with horned and mouthless masks hiding their faces, is in his third incarnation. Dressed like a papal nightmare, he slowly drifted across the stage with a raised arm and exhorted the jammed house to revel in the satanic ritual. But in case you didn’t figure it out, his tongue is firmly pressed against the inside of his mouth. Before playing “Body And Blood,” he said “This song is about eating flesh and drinking blood. Do you like that, Boston? We’ll see about that.” But don’t mistake this band for fellow Swedes and avowed satanists Watain, who are notorious for pelting the crowd with rancid pig blood; no entrails or bodily fluids made an appearance. Clearly the band’s tapped into something, and the collective audience voice sang out the end of “Year Zero” at hellishly impressive volume. It remains to be seen how long the band’s schtick can last, but it’s certainly going full throttle at the moment. And you have to laugh at the chutzpah of an anonymous band selling copies of autographed LPs for $100; the guitar tech probably signed them for all we know.

England’s own Purson took the stage first, and with Ghost’s elaborate stage set behind them, they were forced into an unconventional five person across stage formation. There have been some pretty strong female-led metal bands that I’ve seen recently (Lucifer, Blood Ceremony, Jex Thoth. Electric Citizen and Ruby The Hatchet among them) and Purson is a worthy contemporary. They play more of folk/psych mix rather than doom, but when called upon, leader Rosalie Cunningham can put her SG to use as it was intended. The crowd gave them a strong reception, which can be a hit or miss situation for a relatively unknown opening band in front the headliner’s fans.

Click on the photo below for the photo gallery of both bands. 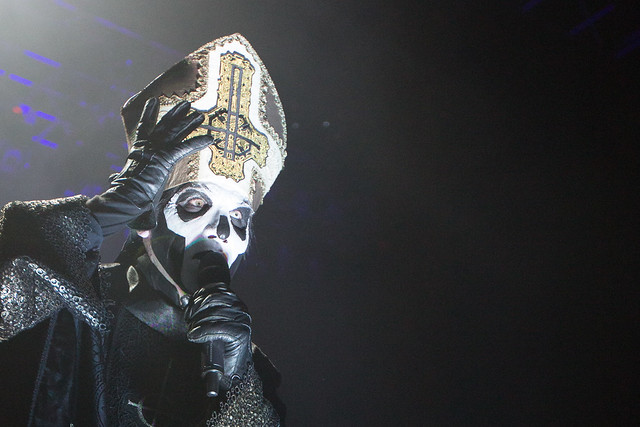