Keys are pretty important. They control access to your home, your car, your valuables… you just don’t hand them over to anyone. Especially strangers. IDLES? They’re more like friends, if not family. So, when someone’s keys found their way to the stage in some improbable manner, guitarist Mark Bowen took notice and during a song break he found the original owner and tossed them back. Solidarity – they just don’t sing about it. As bands go, IDLES doesn’t do anything particularly groundbreaking; their formula of highly rev’d power chords that Bowen and fellow six stringer Lee Kiernan constantly churn out fight to keep up with the shouted vocals of singer Joe Talbot in an escalating war for dominance. It’s not clear which side wins, but that’s not the point is it? Everyone wins with this explosion of joy, rage, inclusion and most of all, humanity. This is the second time seeing the band, and they like close contact with their fans. Kiernan typically dives into the crowd towards the end of “Colossus” and tonight was no different, but later on he’d go back in and with the benefit of an exceedingly long guitar cord, continue playing as he got towards the back of the fairly cavernous House of Blues before striking back for his home on stage. Bowen similarly got in close, standing on the barricade rail and holding a fan’s hand up for support during Kiernan’s foray. But it wasn’t just them coming down into the crowd. Before the pro-immigrant blaster “Danny Nedelko,” Talbot spotted a young fan at the rail with his phone out, trying to show him something. Talbot couldn’t read it so he took the opportunity to invite the young man up on stage, and then the legend of South Shore Max was born. After receiving a hug and microphone, Max nailed the vocals with Talbot, jumping up and down and generally unable to contain his pure glee, which is totally understandable. A stage dive and a crowd surf later, South Shore Max had the best story to tell at school the next day. Of course the show ended in a glorious storm of pure chaos; it wasn’t the impromptu Frankenstein-esque medley of “Wonderwall,” “More Than A Feeling,” “Nothing Compares 2 U,” “All I Want For Xmas,” and “Easy Like Sunday Morning” all mashed into “Love Song” that was the high point but the closer “Rottweiler,” which found opening band Gustaf coming on stage and finding something to hit, a mic to scream into, or an instrument to actually play. Bassist Tine Hill found none of those, and so after she did a handstand she somehow managed to break Kiernan’s pink Telecaster and throw the bits into the crowd. Now THAT’S how you end a show. Speaking of Gustaf, they had a hometown presence as singer Lydia Gammill hails from Boston, and she trod out on stage with some Red Sox gear that quickly got torn off like some NBA warm-ups to reveal a harlequin body suit. Minimal, arty, and dancey, they sounded like Gotham’s answer to Dry Cleaning without the droll vocals or the songcraft. They were fun, though and I’ll see how they grow into their sound and vision. 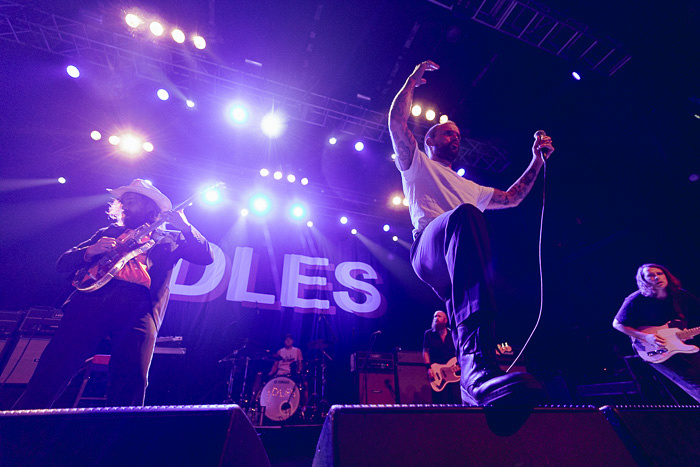