The pre-show anticipation of the masses hung just as heavy in the air as the hot, sticky humidity of the summer evening. I’ve not seen the Xfinity Center lawn so packed in quite some time, and people were ready to cut loose with Harris, Murray, Dickinson and the rest of the Iron Maiden crew. And if there’s an unwritten rule about wearing the shirt of the band you’re going to see, Iron Maiden is definitely exempt from that one; guitarist Janick Gers led the way with a sleeveless version of the Book Of Souls cover art, and it seemed like thousands followed his lead, proudly wearing a variety of IM-emblazoned shirts.

Once the customary “Doctor, Doctor” cover of UFO was blasted over the PA, a short animated bit of Eddie running through the Latin American jungle ran on the two screens. A spotlight seared through the darkness to illuminate a stone altar with smoke billowing from it, and suddenly a hooded Bruce Dickinson was crouched over, as though inhaling the fumes. Throwing back his hood, he triumphantly threw his arms in the air, and as his bandmates took the stage an eruption of flames shot skyward. If there was any doubt that a big rock show was about to go down, those thoughts vanished instantly.

Pilot, fencer, and now cancer survivor. Not the normal resume of a musician, but then again Dickinson is no ordinary musician. His recent medical scare delayed The Book Of Souls for a bit, both recording and supporting via touring, but he’s back to health and looking none for the worse. While his bandmates chose lighter stage garb to help deal with the stifling summer weather, Dickinson work heavy work trousers, tall lace-up boots and a black hoodie. I’ve seen less physical activity from wrestlers struggling to make weight before a match, and Dickinson prowled the upper level from corner to corner, as well as the stage.

It’s no surprise that the set was heavily tilted towards the new Book of Souls material, but the classic twin leads and galloping beat, fused to crowd-friendly singalongs was ever present, especially on “The Red And The Black.” From there, the classic track “The Trooper” was featured, Dickinson waving a large, battlefield-soiled Union Jack as the backdrop switched over to an image of band mascot Eddie that’s familiar to anyone who’s enjoyed a can of The Trooper ale.  Singing from the upper part of the staging, Dickinson ended the song draping the flag over Gers’ head, completely covering him. The band was clearly having fun, especially Gers who spent almost as much time swinging his guitar around his head or putting it through his legs, as fellow guitarists Dave Murray and Adrian Smith pulled up the slack.

While not being particularly known as a politically-minded band, they have penned songs such as “Afraid To Shoot Strangers” but aside from a shaded reference of “what could possibly go wrong” and elected officials during a short bit of banter about the Mayans (the inspiration for the recent record) and their mysterious demise, Dickinson and company kept the focus on rocking out.  At the close of the title track, Eddie came to life, towering over the band members and trying to attack them until Dickinson reached in and pulled Eddie’s heart out. I’m no Latin American anthropology scholar, but isn’t that more of an Aztec thing than Mayan? Regardless, the now detached heart was squeezed and blood shot out down to Gers and into the front row of fans, and eventually was tossed into the crowd.

The triple threat of “Iron Maiden” (band name, record title, song title, a la Black Sabbath and others) showed by the New Wave Of British Heavy Metal (NWOBHM) was so popular regardless of radio support – blistering twin guitar leads and a frantic rhythm powered by Steve Harris and Nicko McBrain = arms pumping in every direction. At the conclusion of the three song encore, the wry ditty of Monty Python’s “Always Look On The Bright Side Of Life” accompanied the departing throngs, and it describes Iron Maiden’s outlook pretty well.

The rise of Ghost has been an impressive one to see, rising to unimaginable heights since their 2010 debut Opvs Eponymovs was issued on Lee Dorrian’s stoner rock/doom cult label, Rise Above Records. They made the most of their shortened opening set, with “Square Hammer” right out of the gates. Ostensibly a tongue-in-cheek satanic subversive collective (their self-proclaimed mission is “The simple intention to communicate a message of pure evil via the most effective device they can find: Entertainment”), they operate more like a metal Menudo, with anonymous musicians taking the role of either singer Papa Emeritus, now up to version IV, or one of the nameless ghouls that form the rest of the band.  Say what you want about their methods, the fact that they can create catchy songs like “From The Pinnacle To The Pit” or “Ritual” and marry them to a cohesive visual theme has proven to be a very effective strategy. 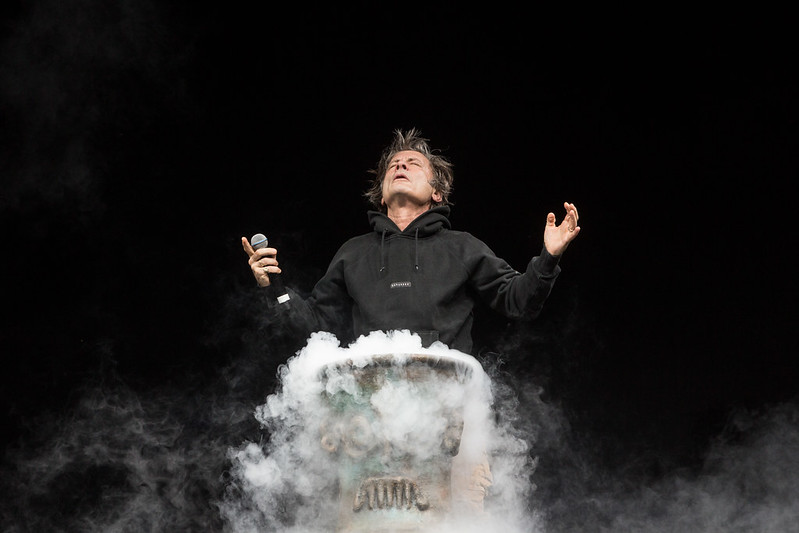