You don’t get a lot of chances to see people who caused seismic shifts in the areas of their expertise, who were disruptive and propelled the evolution of music forms in completely new directions. The Beatles, Dylan, Sabbath, Chuck Berry, The Velvets, etc… all made their mark personally via their recorded work while making huge ripples in the pond that affected countless others. Kraftwerk certainly belongs in that discussion. This was a rare opportunity for Bostonians to see the show on their home turf, without pangs of regret and jealousy when looking at the tour dates of past Kraftwerk performances which assiduously avoided Boston, and the crowded building responded with thunderous applause after each song.

The presentation of the 3D projections was startlingly effective, with each audience member handed some paper 3D glasses that gave amazingly credible depth to the images. (Sorry, my camera was decidedly 2D, so the images accompanying this piece won’t give the full picture). The leader of the group, Ralf Hütter, is soldiering on without co-founder Florian Scheinder, and one has to wonder if the other three people on stage, in Tron suits and behind lit podia, were really necessary. In fact, one could posit that the Kraftwerk world tour could occur on the same night, with robots on stage and pre-recorded music playing seamlessly to the visuals. I’m not sure that audiences would really register much of a different effect. Robots did make an appearance during “The Robots,” their mechanical motions a perfect complement to the “Man Machine” song played earlier, with real people on stage. Sometimes it’s tough to tell the difference. Stellar performance either way; carbon and silicon, elementally speaking, have much in common. And Kraftwerk has underscored that commonality like no other. 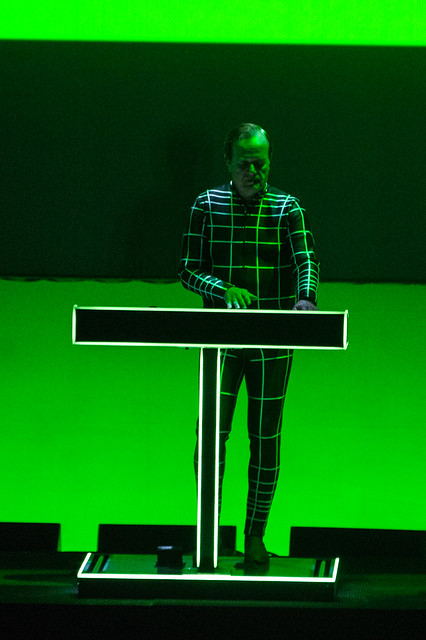