Metallica, aside from having the talent and drive to make it where they are today, made two critical and correct decisions very early into their career. The name they chose and the logo they designed helped cement their band as not only the standard bearer for thrash, but for metal in general. That’s a crown they’ve held for quite some time, and while there were significant bumps in their journey, their latest record, Hardwired… To Self-Destruct hearkens back to the sort of adrenaline rush that sucked in so many heshers and non-heshers alike in the first place.

And while the metal scene initially looks forbidding and unwelcoming to outsiders, my experience shows that it’s the complete opposite. For the most part, people just want to have a good time and forget about the stresses of society that press down every day. James Hetfield immediately addressed that same concern-“We don’t care what sort of food you eat, what you look like, what religion you may or not practice. None of that matters. We’re here to celebrate heavy music, not as fans but as Metallica family. Let’s forget about all the shit around and just rock heavy!”

High stanchions above the stage were used to inflate giant balloons depicting the more recent record art, the stage itself flanked by the twin jagged lightning bolts of the famous Metallica logo, and the foursome busted right into the title track from Hardwired. The martial snare of Lars Ulrich called the twin guitars from idle to full throttle and the gig was off. And there was never any let up from the accelerator. An early deep cut of “For Whom The Bell Tolls” got the weathered geezers with thirty year old Metallica patches sewn to their battle vests to launch their fists into the air, again and again. Random mosh pits formed in the expanse of the general admission floor, and enough pyrotechnics were blasted out into the warm, humid evening air to heat a small Eskimo village for a year. Yeah, the set was off to a good start.

One of the upsides to seeing a band in a giant arena is the production cum spectacle, and Metallica didn’t skimp on this. There was a large fleet of tractor trailers parked outside the stadium, and the stage allowed for massive video displays that alternated between live camera feeds or programmed material, such as the war images that precluded “One.” Extra fortunate fans shoehorned into a small area that was flanked by ramps from the main stage, forming a ring that penned them in extra close to the action, when Hetfield, Robert Trujillo or Kirk Hammett decided to stretch their legs and do some walking.  At the end of the set, Lars got to see what the view from there looked like as well, when roadies shifted a drum kit to the end of the ramp. Hetfield described the barebones arrangement as what their garage from the early 80s looked like when they were just getting going. “Seek And Destroy” was a missile directed right at the audience, and much fist pumping and horns in the air ensued.  I’m sure that hardcore fans would have liked to have heard more than a handful of the Kill ‘Em All through Master of Puppets material, but I’m pretty sure that no one walked out of the stadium disappointed with the performance those four guys just dished out. 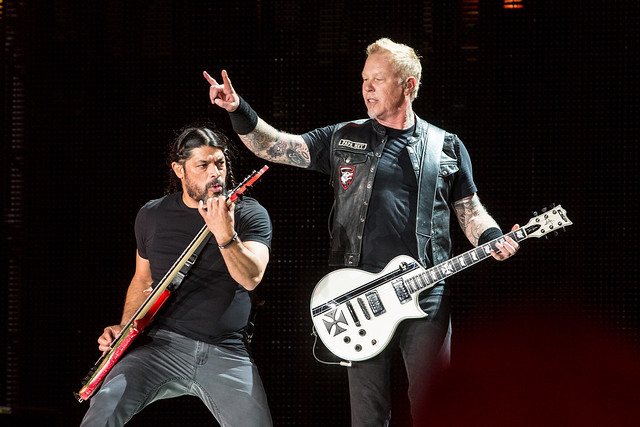