Folk music at its heart is about telling stories. If you listen closely, the crux of the songs inspire, impart wisdom and and invoke hope in others.

But don’t all songs have, or strive to, a resonating message regardless of what type of music it identifies as?

There are decidedly two types of fans at the legendary Newport Folk Festival. Their roots can be traced back as far as the Bob Dylan electric controversy of 1965 – the purist group who demand stripped down acoustic fables and social messaging and those who embrace new acts  with open arms, regardless of the ethos it might fit into.

Day 1 of Newport Folk tested this theory with a diverse, rich billing that included the likes of the Violent Femmes (folk-punk), Raury (soul/hip-hop) and Flight of the Conchords (comedy.) Each set, a departure from “folk” in the traditional sense of the word, was clearly adored as evidenced by the booty shaking occurring. Raury, a prolific 20 year-old from Atlanta, who has a decidedly more hip-hop leaning, spread messages of let peace prevail as he spun a tale of a childhood friend who made different life choices from Raury and ended up as an unfortunate casualty.

Themes of the impending election and Brexit were felt throughout all of the sets, as new spins on the more classic folk sound, such as the Staves, Brett Dennen, and Freakwater took the stage.

Artists seem to enjoy the inspiration gained from the range in artists too, noted Alexander Beggins and Kelsey Wilson, who share lead vocal responsibilities for Wild Child, who opened the festival. Beggins said they draw inspirations from the different artists and recalled watching a set by Dr. Dog earlier that day and feeling blown away.  He said “There is so much good talent..it makes you want to stop playing or be more creative.”

The rival forces of old versus new style was apparent and downright welcome during the two most anticipated acts of the day; the kick-off of the Case Lang Viers tour and the reunion of the Flight of the Conchords, who each drew enormous and distinctive crowds proving that there is in fact enough room in the world for all kinds of music to peacefully co-exist. Whether it be through the kinetic energy of three folk rock goddesses or the comedic stylings of a New Zealand duo.

Seems that Pete Seeger and Bob Dylan intrinsically knew the spirit of folk took many forms on that day in 1965 and Newport Folk Festival still embraces that philosophy today. In the wise words of Dylan “Come gather ’round people wherever you roam. And admit that the waters around you have grown.” 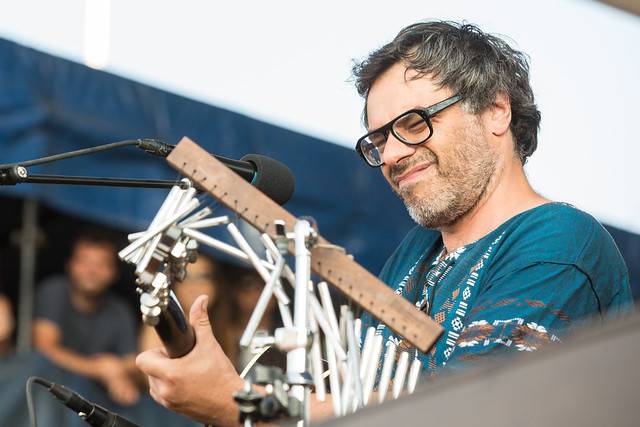