Some bands still have the draw. Whether or not many people have bought copies of their last few records, Red Hot Chili Peppers still managed to bang out the TD Garden on back-to-back nights, a feat that’s pretty impressive in 2017. Speaking of new records, this tour was in support of their newly released The Getaway, and if you were expecting a radical break from their soaked-in-funk-with-a-dash-of-hip-hop rock stylings, what the hell were you thinking? Successful formula? Check. Don’t mess with it. The bass pops haven’t aged all that well but if you’re gonna employ that tactic without sounding like the intro to Seinfeld, you might as well have a pro like Flea at the helm. “Sick Love” had me wondering if they’d actually paid out any royalties to Taupin or John, as the beginning sounds like it was traced from the outline of “Bennie and the Jets,” before veering into different territory. A suitably dayglo comi-horror played out on the backdrop, looking like Wayne Coyne filled in as creative director. If you predicted the scene where a seductive woman turns into a spider and decapitates Kiedis, credit where credit is due.

Chad Smith still holds the reigning title as the drummer who looks like a genetic replica of Will Ferrell, and he’s a thoroughly essential piece of the band, with thunderous power and unwavering precision. Josh Klinghoffer is the relative new kid in the band, having taken over the pedal board position from heavyweights like Dave Navarro and John Frusciante, and he brings his own style to the mix, especially notable on “Go Robot” when he switched from Nile Rodgers choppy funk chords to a full-on Adrian Belew noise storm. Kiedis is Kiedis, the face of the band and like Keanu Reeves, a man who knows the limits of his range and is very comfortable within it. A walking boot kept him from the kinetic aspects of the live show, and you could tell it frustrated him a bit to just be content with restless circling and the occasional hop; during a couple of jam sessions he left the stage completely, likely to avoid the temptation to do something rash and further aggravate the injury.

If Kiedis is the face the band, Flea’s the soul. He’s let his close-cropped hair grow out to a still short but shaggy mop, and the addition of the mustache morphed him into some unholy combo of a skate rat cum Jimmy Buffett/Bob Weir creature. Still amazingly fit for a 54 year old, he spent time in the air and the ground, and did a walking handstand from stage edge to his bass position before starting the encore. The engagement of local flavor had been limited to Kiedis’ opening reference to SBLI (“We heard you had a rough weekend, so hopefully we can cheer you up tonight”) until the schmaltzy chords of the Cheers theme began the encore, with Klinghoffer taking the main vocal. (In the somewhat not fair department, the following night’s show featured Mission of Burma’s “That’s When I Reach For My Revolver” to fulfill the Boston reference). Closing out with their massive ’90s hit “Give It Away” wasn’t a surprise, unlike their mid-set cover of The Stooges’ classic scorched earth call to arms, “Search And Destroy,” when Kiedis figured he’d been wearing a shirt long enough.  Hopefully they won’t take another five year spell between shows in Boston.

Trombone Shorty and Orleans Avenue is support for the first leg of the tour, and their horn-fueled funk and R&B uplifted mojo party was the perfectly lit fuse to get the crowd out of their seats and into the show. Shorty’s probably the only trombonist/band leader out on the scene, and the unorthodox combination really works under his guidance and passion. The same couldn’t quite be said for opener Jack Irons, who is the drummer answer to Jason Everman, in that he’s been a member of two seminal bands. Flea introduced the original RHCP drummer’s set in a heartfelt way, but his solo drum/backing synth track set didn’t exactly set the mood for a party, something Shorty corrected straightaway. 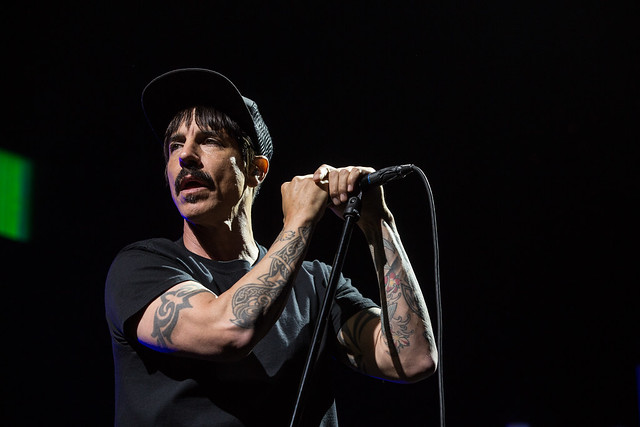