When the shirts come off, it’s a sign that shit is about to go down. Long a tradition in street fighting, it’s centered around a mix of intimidation and freedom. I’m not sure where exactly the habitually bared torso of Matt Pike falls in that continuum, but when he takes the stage with the brutally efficient rhythm section of Des Kensel (drums) and Jeff Matz (bass), as an audience member it’s best to prepare for war. Riding high on the bristling strength of their latest record, Luminiferous, the band approached the gig as they always do – full choke hold from the start and no mercy. After the adrenaline-charged opening of “The Black Plot,” the chugging of “The Falconist” features what could be the most melodic vocal line Pike’s ever attempted, veering far from his usual approach which is more akin to the aftermath of gargling a mix of thumbtacks and kerosene. The relentless black grip of “Carcosa” was an early highlight, each man surrendering completely in the service of the riff.

Pallbearer have made the most of their short time on the doom scene, rising from complete obscurity via their home state of Arkansas to putting out two records of stately and bludgeoning doom that have caught the attention of tastemakers at Pitchfork and elevated their profile with a heavy dose of relentless touring. (This would be my sixth time seeing them since 2013). The doom template is pretty well understood; down-tuned guitars, slow, plodding beats, and layers and layers of minor key guitar chords. What sets this band apart from the rest of the pack is Brett Campbell’s vocals. Though they are high-pitched, they are not operatic in the sense of King Diamond or even Bruce Dickinson. That touch leavens the lurching, heaving claustrophobia of the music, that also gives the listener some solid hooks to hang on to.

Lucifer got things going with another re-tread through the well-worn Sabbath bag of tricks, and the fact that Johanna Sadonis fronts the band meant instant comparisons to bands such as Jex Thoth, Blood Ceremony or Electric Citizen. Sadonis split from well-received band The Oath and joined forces with ex-Cathedral guitarist Gaz Jennings for a more thorough and authentic look through that black sphere. Lots of arm motions, a cape, and tons of chemical fog, all carried by Sadonis’ crystal clear singing and Jennings’ guitar work. 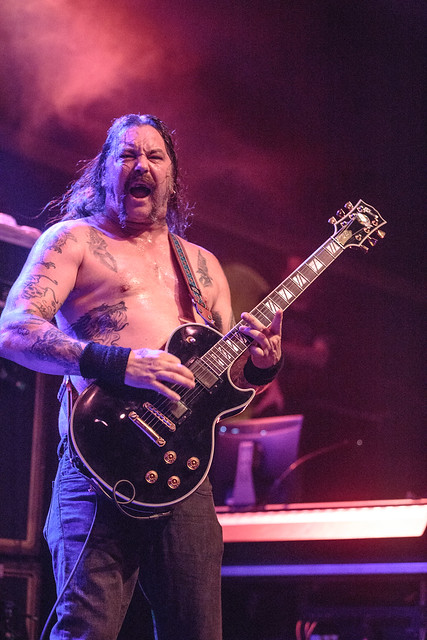