Have mercy. Everything about day two at Newport Folk Festival was hot- the weather, the music, the political speeches, the people.

Before we get to that, which was much later in the day, let’s talk about the standing ovation Banditos received at noon after their high-energy performance and reverberating drum solos that inspired air drums in even the most reserved of festival goers.

Never mind Carmen Sandiego or Al Roker, where in the world is Kris Kristofferson? He is in Newport, bounding in on everyone’s sets, headlining his own and people are losing their minds. In typical badass fashion, he rode up in a golf cart, clad in his cowboy boots, and surprised crowds with an intimate performance on the first day, in the historic Fort Adams Museum where he performed a set which included “Me and Bobby McGee.” Swoon. Really, is there any other way to make an entrance?

He also took the stage with the lady everyone wants to take to homecoming right now, Margo Price. Since releasing her first album in March, the Nashville-based star has been busy, and recently made an appearance on Saturday Night Live. One of the best qualities about a live Price performance, aside from her smokin’ chord progressions and throaty voice, is bearing witness to the diversity in her sound that you may not otherwise pick up on the album. Price is all of the best things combined; gritty, poignant and soft at times. One of the most refreshing things about Price is that she is real – she has no qualms about sharing her life story with the public and yesterday, laid some truth on the crowd when she treated them to a rare, live version of “Hands of Time.” Backed by a string quartet of Berklee College of Music students, she sang “When I rolled out of town/I was $57 dollars from being broke.”

One of the most important things about music festivals is getting your strategy down in advance and leaving some wiggle room for falling in love with a set. It was difficult to leave Margo Price but Nathaniel Rateliff and the Night Sweats set overlapped. Upon arriving at the set, only one thing was apparent: the audience had come to dance and Rateliff was delivering the soul-shaking soundtrack.  At one point, as if transfixed, he threw his tambourine to the ground and broke it in a moment of frenzied performing.

Scotland’s Frightened Rabbit swung through for their first performance at the festival. Front man Scott Hutchison said they were really excited to be a part of the lineup and hoped that the audience was ready for “something electric.” The band’s newest album, Painting of a Panic Attack, is a departure from the band’s early acoustic sound and based on the reception they received, they had nothing to worry about. Interestingly, Hutchison and drummer Grant Hutchison noted that the new sound was both a decision by the band to grow musically,  but also that due to geographic obstacles, the band created much of the album via email. The band mentioned they were most excited to see Ryan Adams, who both had sets scheduled for the same time.

A fellow festival goer lamented that you never know what to expect at the Newport Folk Festival. Musicians that normally wouldn’t play together are paired up and that is part of what makes it so special. Take for instance the Ryan Adams set with the Infamous String Dusters and Nicki Bluhm. This was one of the most anticipated acts of the day already, and then Adams came out in a Venom shirt. He famously re-interpreted Taylor Swift’s 1989, but perhaps he should have reconsidered his approach and rendered it in full black metal mode, a la Satyricon. After all, he’s done a metal record already, and in a nod to the denim and leather world he has come to appreciate, the acoustic collective of banjos, acoustic guitars and other hollow-bodied instruments, they launched straight away into a cover of “South Of Heaven” by Slayer.

Then, on the 90 degree day, the shade got thrown. Wedged in between two relatively low-key songs, Adams, who is hysterical on stage, was chatting about the boats he could see in the distance and during his stream of consciousness, mentioned that Father John Misty, who was playing a set later on, was probably off somewhere having a meltdown. Misty, who arguably gave the most socially conscious performance of the day, later riffed back with “my shirt is made out of sails from expensive boats, which I personally stole while watching Ryan Adams.“ The festival cast a whole new light and appreciation on Misty, where he seemed to let his guard down a bit. The reclusive indie-icon is incredibly self-aware and serves up truth like a meal in his commentary but doesn’t push it on anyone.

Finally, the high priestess of post-punk poetry took the stage with longtime sidekick Lenny Kaye and band, and proceeded to weave a web of beauty, mystery, and euphoria, celebrating the positive aspects of humanity with the audience.

It was hard to top the kickoff day of of the fest and maybe that isn’t the intent of festival virtuoso Jay Sweet, but rather to provide a consistent, euphoric state through a crescendo of artists that each build off of one another.

Click on the photo below to access the entire gallery of photos from the second day of the festival. 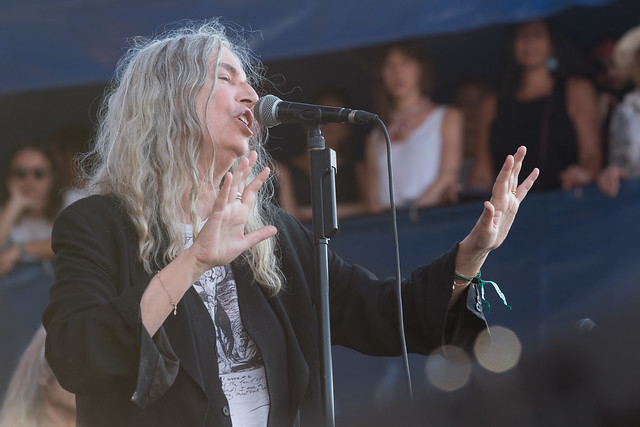