There’s a lot going on under that trademark mohawk of Maynard James Keenan. Best known as the mercurial leader of prog/psych/metal band Tool, he’s got two other pans on the burners with A Perfect Circle and Puscifer, and that’s not even talking about his wine-making enterprise. Whereas Tool goes for epic workouts that continually twist and turn, Puscifer is more interested in entertaining on a more direct level. With their third full-length record just out, obviously Keenan is happy with it and virtually every song save iTunes exclusive “Flippant” was played.

The sonic web of Puscifer is a spacious one, with vocals expertly handled on equal basis between Keenan and longtime mic foil Carina Round, who spent most of their time in a wrestling ring (more on that later). Synthesizer is a prominent piece of the sonic backbone, and electronic drum pads were an important part of Jeff Frield’s kit, along with more traditional acoustic drums. “Grand Canyon” featured tribal rhythms as an aerial view of the rock formations of his adopted home state of Arizona played on the backdrop, while the kickoff track “Simultaneous” had a pre-recorded monologue of a character sketch of an eccentric walkman-absorbed punk rocker who eventually doles out this nugget: “We will never know world peace, until three people can simultaneously look each other straight in the eye.” Keenan’s definitely got a sense of humor, and his obliqueness can sometimes be misinterpreted, as evidenced by the recent kerfuffle where he appeared to malign his fan base.

He’s also not a fan of people not paying attention to the live show, and cameras were a distinct no-no. That point was driven home in a few ways, first via the most aggressive security check I’ve ever seen at The Orpheum, then with signs of NO PHOTOS OR VIDEO plastered throughout the entrance and lobby, and finally with a humorous recorded message of Maynard making the point very clear with a #PutItAway hashtag mantra. Not that phones would be able to take a reasonable photo of him, as he spent much of time at the back of the stage in the ring in very dim light, his face covered by a Mexican wrestling mask with a cutout accommodating his mohawk. One fan was spared the draconian measure of getting kicked out of the show when security caught him taking a photo as I’ve observed at Tool shows, with his punishment deletion of the images. People like this are the lyrical target of “The Remedy,” so just put it away and enjoy the show.

Now, about that wrestling ring. Tool’s been known to invite some interesting and fringe bands such as Big Business, Yob, and Melt-Banana who would otherwise never see an arena from a stage perspective. Tonight, the opening act (billed as Luchafer) wasn’t even musical. Instead, the crowd was treated to an exhibit of lucha libre, the Mexican version of big time wrestling known for the participants’ colorful masks. The two teams had both male and female members, and a rogue character who initially provided between-round libations eventually turned on all four of them, snatching a large key as his reward. All in all, a refreshing diversion from the usual opening act.

Photos of Puscifer and Luchafer: 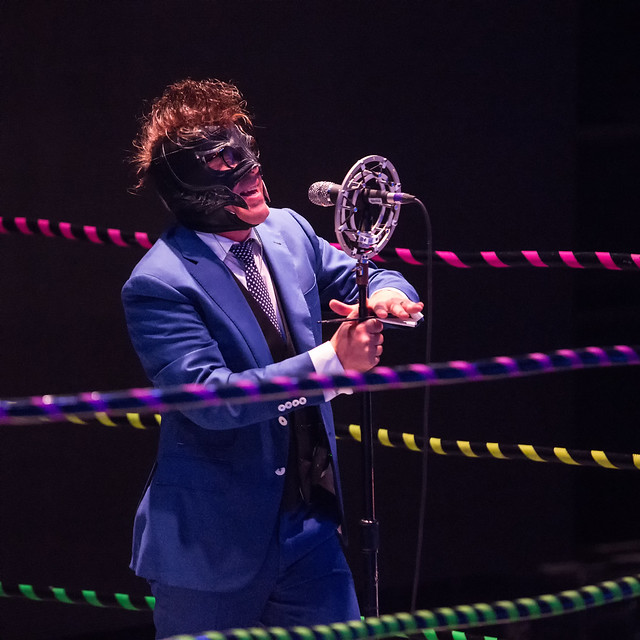