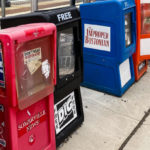 But with your support we can bounce back fast! Be kind this holiday season, wear a mask indoors Mass layoffs cause hunger as charities face declining volunteer numbers due to the COVID-19 outbreak. Listen for the current state of food insecurity in Boston. And the simple thing chefs can do to help sufferers

Last Saturday night, my wife and I went out for drinks and snacks at a well-known local restaurant. It’s the kind of place that can get expensive if you’re having a full meal, but isn’t too pricey for a couple of small plates. So hanging out there is an affordable luxury now and then.

One of the attractions of such a hip room is that its chef works overtime to change the menu with the seasons and available ingredients. Which generally makes for an interesting experience.

Problem is: I have heartburn. Not like “ow, ow, I ate four-alarm chili and need some Tums” heartburn. The real deal. Gastroesophageal reflux disease. GERD. A sometimes debilitating condition. Which doesn’t go away. And for which there is no cure—although symptoms can be alleviated.

I have had GERD for 21 years. So let me explain what it does to people who have it when mealtime rolls around. It trains you like one of Pavlov’s doggies. But through a negative stimulus: pain. All kinds of pain, depending on what you eat and drink and in which combination.

After decades of nasty reactions to certain foods and drinks that sometimes stopped me from sleeping, the way I look at a restaurant menu is completely different than the way people without heartburn look at a menu. Which is to say that—excepting a very small list of more or less “safe” cuisines—I mentally label most of every menu I see as “off limits.”

The trick for people with chronic heartburn is to learn to navigate menus to find something to eat. Because nothing sucks worse than going out with friends, family, and co-workers, and having to sit at the table for an hour sipping water while everyone else is eating, drinking, and making merry.

Unfortunately, the restaurant industry—from the cheapest greasy spoon to the grandest destination dining room—has made absolutely no accommodation at all for people with GERD and related conditions. In an age when even fast food restaurants bend over backwards to provide accommodations like gluten-free options for people with less common conditions like celiac disease and wheat allergy (and a much larger number of misguided dieters). To the point of marking gluten-free dishes on menus, and sometimes making significant changes to their bills of fare.

Celiac disease affects less than 1% of Americans, according to the 2017 article “The Gluten-Free Diet: Fad or Necessity?” in Diabetes Spectrum, a publication of the American Diabetes Association. With the percentage of people with wheat allergy being about the same: less than 1% according to a a 2008 metastudy in the Journal of Allergy and Clinical Immunology “The Prevalence of Plant Food Allergies: A Systematic Review.”

Yet, the ADA piece points out that a “2013 study found that 65% of American adults think gluten-free foods are healthier, and 27% choose gluten-free products to aid in weight loss,” despite scientific evidence that gluten-free diets can cause weight gain. Because of what amounted to a fad for gluten-free diets in the preceding decade. Leading many otherwise healthy people to stop eating gluten-rich grains like wheat—as if they were people with celiac disease or wheat allergy. Most without any kind of medical diagnosis. But these faddists demanded gluten-free options at restaurants nationwide until it became a cultural phenomenon. Which resulted in what may be permanent changes to menus across the US.

So over 18% of the US population of 327 million people has heartburn at least once a month. And almost 5% of that population has heartburn every day. Like I do. While under 2% have a condition that makes them unable to consume either wheat or all grains containing gluten. But restaurants have not changed their repertoire in the slightest in response to the larger group of customers with GERD. Maybe because Hollywood types with chronic heartburn are more stoic than their (ostensibly) gluten-intolerant counterparts and the mass media never picked up on the problem, I don’t know.

To return to my restaurant reverie, upon perusing the menu, what did I see?

Out of over 30 dishes, I could not eat a single one without modification. And most dishes were cooked in such a way that I could not reasonably ask for a change that would allow me to eat them.

Now, some readers may think, “C’mon, I’ve had heartburn before, it’s not that bad.” To which I would reply, there’s a big difference between what most people think is heartburn and what people with chronic heartburn experience.

To summarize, in people like me, the valve between the food pipe and stomach doesn’t work correctly. It relaxes when it shouldn’t, allowing acid from the stomach to come up into the food pipe and literally burn its more sensitive tissue. That hurts. A lot.

What gastroenterologists—the specialist doctors who treat GERD—are generally terrible at explaining is what they call “lifestyle modifications.” Which, together with medicines that we’re really fortunate to have had for over 30 years now, can allow people with GERD to live reasonably normal lives without (often ineffective) surgery. Those lifestyle modifications include several major changes, but the biggest one is the change to what people like me can eat to avoid pain and damage from the condition.

Because several types of food are “GERD triggers.” Meaning that they cause the valve between the food pipe and stomach to relax as discussed above.

And the information that gastroenterologists—and the nurses and physician assistants that work for them—are particularly bad at imparting to chronic heartburn sufferers is not only which foods to avoid, but which foods are ok to eat.

Which explains why many people have to go through what I’ve gone through: Painful trial and error with food and drink until we answer those questions for ourselves.

So, to give you an idea of how complicated this process of adaptation gets, here’s a list of foods and drinks that can trigger GERD:

Perhaps you all will understand why I will sometimes say that “the universe has conspired to make me a Mormon” (minus their famous jello salads, sadly) when asked why I’m not eating and drinking all the things. Even many condiments like ketchup, mustard, and mayonnaise are permanently off the menu for me.

Keep in mind that triggers can also affect different people differently or not affect them at all. There is no universal trigger roadmap for GERDers. And even foods that seem safe may have other chemical compounds in them—not all of which have been identified as triggers by researchers—that will bother some people with chronic heartburn. Watermelon and cucumbers are good examples. They both seem like they should be safe to eat given their higher pH values, but they both have other things in them that can hurt me and others.

In addition, each trigger has its own pain—fat causes me to feel a kind of dull discomfort and acid makes me feel like someone shoved a steel spear through my sternum (which is why I get annoyed with well-meaning hippies that suggest apple cider vinegar as a “cure” for GERD). Plus it’s possible to suffer from more than one kind of heartburn pain at the same time. Most amusing of all, the digestive tract is innervated by the vagus nerve that also innervates the heart and lungs. And our brains can’t differentiate between heartburn pain and scary major disease symptoms very well—explaining how heartburn can make you feel like you can’t breathe or like you’re having some kind of heart attack.

The best way to avoid such distressing pain is to avoid triggers.

But at the nice restaurant like the one my wife and I were at last Saturday, again, every single dish had at least one GERD trigger in it. And I get it, chefs at fancier places like to experiment with innovative combinations. And they often seek a balance of sweet, salty, bitter, acidic, and umami flavors. But acidic foods are the worst heartburn triggers, and current trends in fine dining have seen an explosion of dishes featuring preserved foods like pickles and all kinds of vinegars. So in seeking balance, chefs are causing a great deal of pain for the significant percentage of Americans with chronic heartburn. Notably when they add such triggers without listing them on their menus.

However, like most people with dietary restrictions, people with GERD don’t want to make life difficult for restaurant staff. Thus we tend to nibble whatever garnish or bread or side we can—or not eat at all—when confronted with a difficult menu like I was last weekend.

By way of remedy, I have one suggestion for America’s chefs. I’m not asking for “heartburn-friendly” notations to appear on every menu. But there’s one really simple thing that chefs in every cuisine can do: just have at least one dish on your menu that people with heartburn can eat. Maybe a protein prepared with a minimum of oil, gently seasoned with salt and simple herbs like parsley; a starch like a baked potato with butter on the side or soba noodles with a dashi-based sauce for dipping; and a non-acidic vegetable like broccoli with a bit of oil or butter and light seasoning as with the protein. When restaurants add that one dish, GERDers will find it. And order it frequently.

Looking at the long list of GERD triggers, it may seem impossible to cook for people with chronic heartburn. But there’s actually a bunch of stuff that we can eat. And people with heartburn will often be super strict with their diets the day before dining out, so that they can have some minor triggers—like fried foods and (typical, not sour or fruit or strong) beer—that they might normally avoid. As when people with diabetes cheat and have something sweet. So chefs can still be creative and make something out of the ordinary that their customers with heartburn can enjoy.

If chefs want some advice on what they can make for us in each of their cuisines, I encourage them to drop me a line at execeditor@digboston.com for some suggestions. I study cooking for fun, have worked in the restaurant industry, and have experimented on myself for many years to determine what people with heartburn can and cannot eat—and what substitutions for common ingredients can make meals more tasty for us. I’m happy to help out, if it means that legions of people like me can eat at more restaurants with less discomfort.