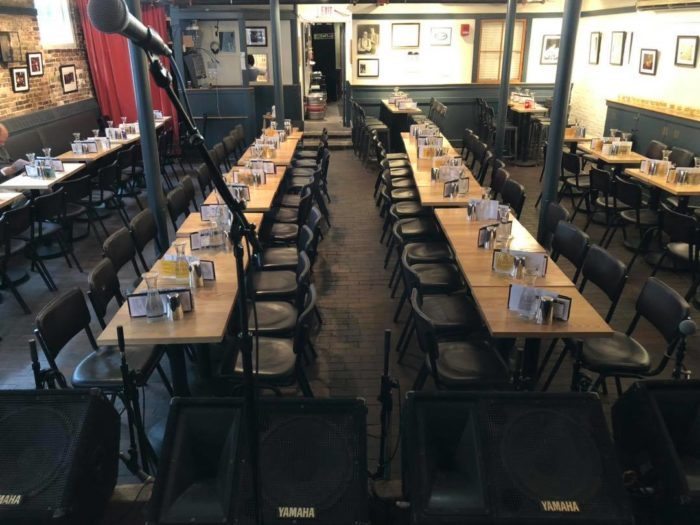 “Club Passim is a cornerstone of not just the Boston folk scene, but the New England folk community at large.”

In every music scene, open mic nights are exceptionally important to the fabric of the community. They’re often the first place where songwriters and various creative types hone their skills, and the same goes for a lot of seasoned veterans looking to try out new material in front of their peers.

The open mic is where you’ll see the local scene’s raw essence, a place where folks of different backgrounds will put their name on a list and play a couple of songs, recite some poems, or perhaps try to make people laugh. It’s the ideal setting for a diverse cross-section of artists to blossom in the same room.

And around these parts, there is arguably no open mic more storied, more historic, than the one that goes down on Tuesday nights at the Cambridge nonprofit music venue Club Passim.

It’s been nearly half a year since the fabled live weekly event was put on hiatus due to the COVID-19 shutdown. Passim has been extremely active in the online space, though, providing a platform for dozens of artists to raise money through nightly shows, and in that spirit the club’s promoters brought back the open mic—virtually—in July. From there, on Aug 11, it finally returned to its regular day and time slot, offering a bit of normalcy in this strange pandemic world. For the team at Club Passim, the most important thing was not simply to bring the series back, but to do it safely.

“While nothing will ever beat being in a room full of folks listening to music together, this has been a fun way to bring the open mic night back,” Matt Smith, managing director and open-mic host at Club Passim, tells DigBoston. “People can be from literally anywhere to play. Recently we had someone from Brisbane, Australia, play a couple of songs at around 8:30 pm our time, which was 10:30 am their time.

“This is going to be a great way for us to engage with a global open mic community and feel like we are all connected. … We are predominately a music open mic, but we also welcome poetry, storytelling, and comedy. … We want to offer a space for all artists in New England to express themselves as many struggle to find creative outlets during the pandemic.” There’s a lot of history at this open mic. Local acts like Ryan Montbleau, the Ballroom Thieves, Tall Heights, Mary Gauthier, Josh Ritter, Anais Mitchell, and innumerable others played there on evenings when things were still normal.

“Club Passim is a cornerstone of not just the Boston folk scene, but the New England folk community at large.” Auyon Mukharji, who plays mandolin and violin and sings in the Waltham indie folk band Darlingside, stresses the importance of this particular venue. Darlingside’s been instrumental in Club Passim’s efforts to keep heads engaged during uncertain times.

Mukharji continues, “They do an excellent job of supporting local up-and-coming acts while also booking pretty much every great internationally and nationally touring folk artist that comes through town.”

Musicians, poets, storytellers, and comics who want to get involved in the Tuesday open mics can register at passim.org. Each edition will feature 10 different acts, with each getting the opportunity to play two songs or to perform for 10 minutes, and participants are limited to one performance per month.

Passim allows covers, but the organizers would rather hear originals, so keep that in mind while registering for a virtual slot. People who just want to watch and listen while the artists perform can do so on the venue’s Facebook page, or by visiting the Youtube channel at 7 pm.